Looking for the Alien

What a mixture has happened since last writing.   Most of it is general ups and downs of an artistic life, so not very exciting, but better in one hit.
I was due to attend another Mixed Media course.... but it was cancelled because of low turn out.
But whoops I took my refunded class fee and spent it on art goodies.

Good news I won a set of stencils by 'liking' on Facebook. I need to have a play with those, bit of monoprinting I think.

I've gotten behind with the Wanderlust course.  Its not that I've been too busy, quite the contrary, but rather I've been fighting the lessons.  Couple of them are not me, and so I was going to do something 'inspired by'.  No pressure, of course I could... but even that was proving unsettling.
So eventually I decided, what are you learning by avoiding, or doing an alternative?  Why not also learn from actually embracing the thing you find tough?  So soon back on track doing the lessons as asked, or nearly so.

bit of a spooky muzak.....
Saw some images on Facebook, of people who 'can't draw' turning out exquisite images.  Found myself yearning for the same.
The truth is I spent two years in drawing lessons, I can do enough for something to be recognisable 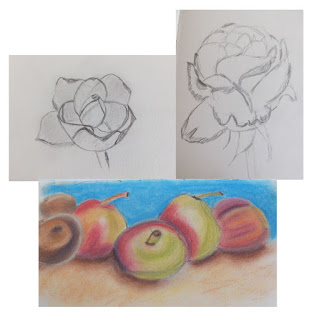 what I still can't do is the recognisable quick sketch. (remember it took 2 years of weekly lesson to get to this!)

My mind sees things like a detailed photograph, pencil in hand, its like a fly with inky boots walked over the paper.

Drawing also gives me a raging headache, I concentrate so hard, its not a pleasure.  So once again thinking, but I'm an 'abstract artist' is it any wonder realistic work is a struggle.  I am the person who did the 'drawing a day' project which was popular years ago, which soon evaporated into paint splodges and textures.
This is my comfort zone. 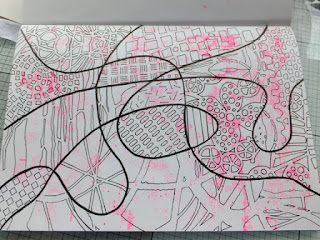 Still on catch up, imagine my horror to watch my next Wanderlust lesson and find it involves drawing people.  Yikes.  Last time I constructed anything other than stick people was 20 years ago.  So the lesson reminded me of the 'formula' for drawing faces, a bit more reading and I had a go. 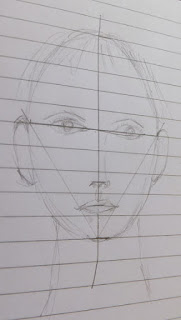 Shocked, I did this, and it doesn't look like an alien.  Now don't ask me to make a face which looks like a known person, but I've stunned myself.  No wonder its being kept and stuck in my sketchbook.  Got to keep the evidence I did it, at least once!

Back to my comfort zone I've signed up for an art project based across the pond, couple of definites as to the what and including, but otherwise free to do as I wish.

I'm going to go back to this kind of thing, but with a layered look.  Our EG Branch is making Travelling Books.  I'm not doing the 'travelling' bit, but am using the book to do my own thing.  Sorted my design inspiration, now to play. 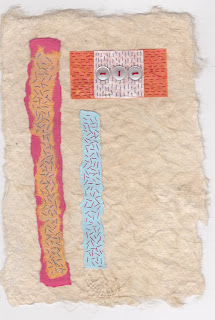 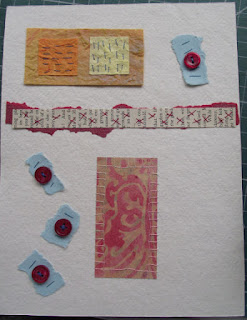 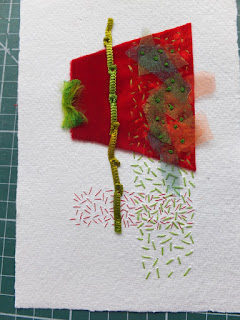 I call these 'pretties' because they have no thinking, no design to them, just play and do.
However, I should make myself feel they have more value by describing them as "intuitive art".
There's a thought to mull over.....