The time has come," the Walrus said,
"To talk of many things:

Well I can't believe so much time has passed since my last posting, so lots of little stuff to catch up with.  I'm not going to reveal why... but the next two lines are also apt in my textile world at the moment.  Sooooo think on......
Of shoes--and ships--and sealing-wax--
Of cabbages--and kings--

I had a day out at a textile Conference with the Eastern Region Textile Forum.  Very nice to have a meeting in the same county as where I live.  And the next one is too, so for a change not leaving at some unknown time of the morning.  Amongst the things I found out about - Vedic Number patterns.  Its also really nice to meet up with people who have other textile interests to your own, especially as now its easy going to catch up and chat like you've never been apart, even though conferences are only twice a year.

At our local Embroiderers' Guild Branch we had a lovely talk re millinery.  I didn't think I'd enjoy it, but it was a very good slide presentation to include history of hats and very accessible information about the modern bespoke hat maker.

Just this week a couple of things have happened.
~ received the application forms for the Burnham Art Trail which is due to take place 20th-28th June 2015  so I will be sending in my submission for that one.
~ also confirmation of the dates for the Rochford Art Trail, not due until much later in the year, 17th-26th September.  It will be a while before the applications open for that, but good to know the when.

Oh and excitement, I've won a prize from a blog.  Its a stencil and comes from Carolyn Dube in the US, this is the lady who I did the Gelli Plate course with.
Now, I do read blogs and Facebook posts, but I tend to only comment on things when I genuinely like something, having been brought up with the "if you can't say something nice don't say anything at all" attitude.  I do hate the gushing "you're sooo wonderful darhlink" posts some people always write on comments. There has been a bit of tongue biting this week, having seen plaudits for something which is misleading... can only hope it comes around and bites.  But, people are people, sigh.

I've also got my bag packed.  No, not holidays.  The bag full of goodies for this: 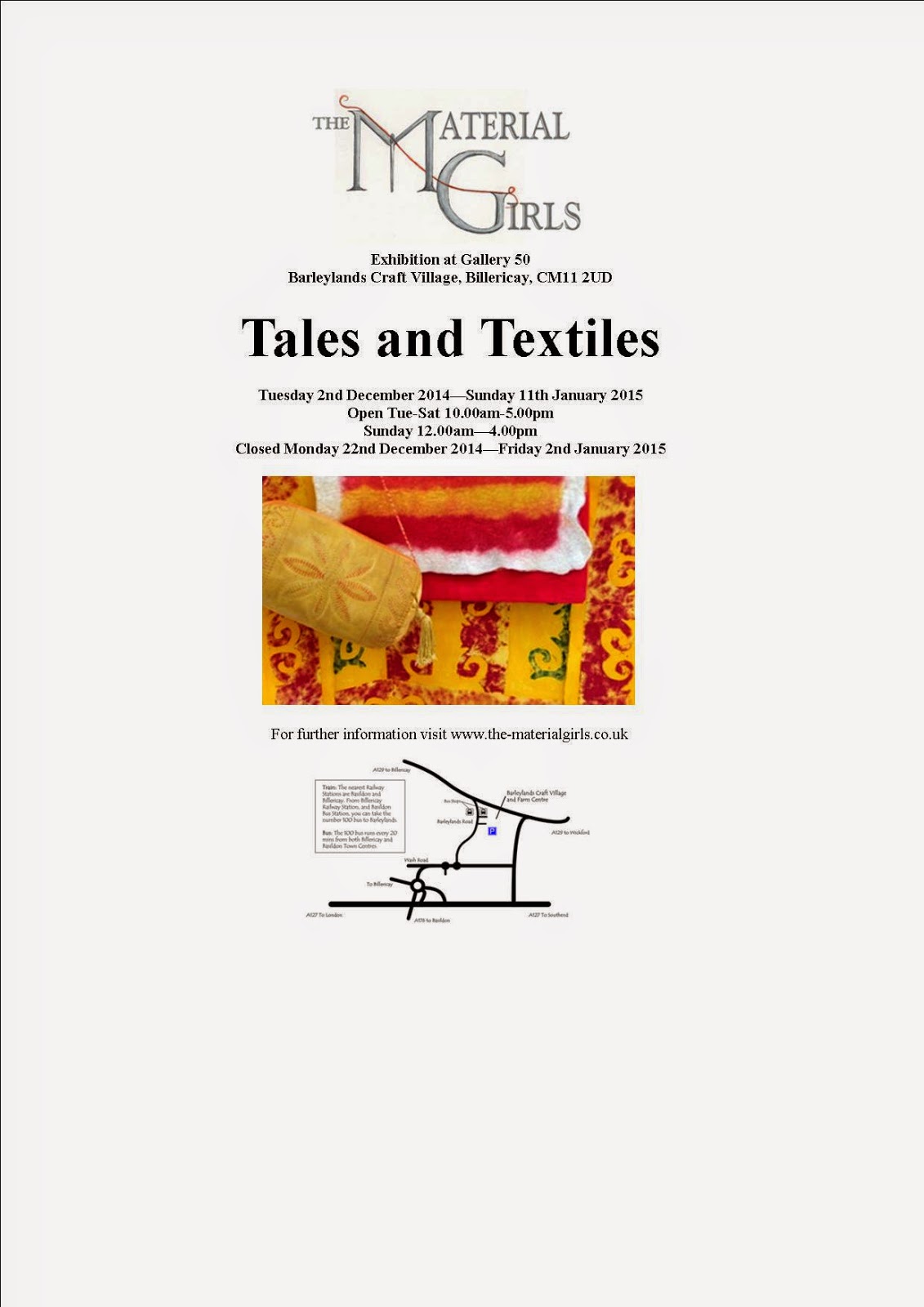 The Material Girls next exhibtion opens on Tuesday at Craft Arena in Billericay, Essex.  Click on our link to take you to our blog, and also take a look at our Facebook page and please like us.  As well as the exhibition pieces forming Tales and Textiles, we will have gift items for sale, so pay a visit for that artisan made Christmas present.

Please also take a look at my own Facebook page.  I've been posting a Sunday Share, with a weekly pic of a piece of my textile art.  Oh and guess what, its published on....... Sundays!!!

Hopefully I will be back, with somehting pretty to show, ideas not a problem, just need staff.

Posted by Beverley at 17:57 No comments: