Remember this previous posting, where my lovely piece of artwork to show, was just a ?

Well the secret auction at Burnham Art Trail  is long over and I'm assuming my Postcard has gone to its forever home.  Here it is to share with you all. 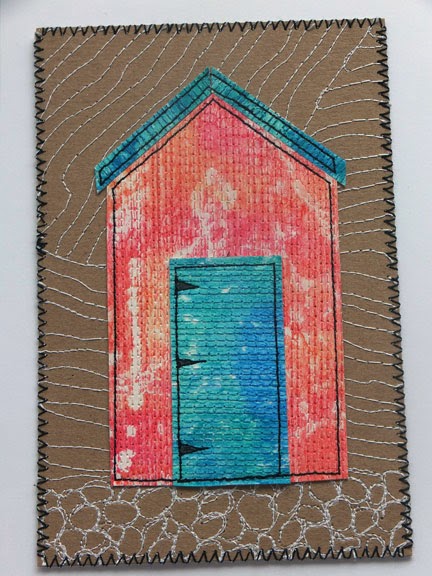 Of course, to match my window, it just had to be a Beach Hut!
The base is Kraft card with free machine embroidery
The Hut itself is has been closely straight stitched
then it was monoprinted and then attached to the base 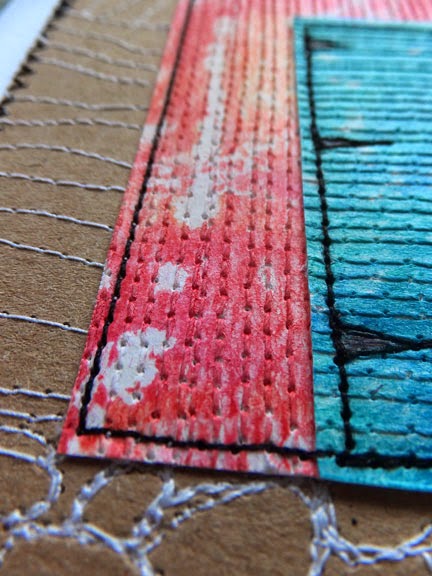 I hope its new owner enjoys

For the time being the Beach Hut theme is being put into storage.  I'm trying very hard to pursue an idea given to me years ago. That is to have 2/3 themes of work, to move between them, as both the mood and ideas strike.  To this end I've gone back to my Map theme, for my personal work - although I also like to play and just make whatever and have ideas on a third theme.  All of my ideas could mingle with each other, ie take a journey (map) to a beach hut!  But that is more accident than design, although may be a link can be found between anything, if you just look.
I don't know if this process will be long term, will be a good thing for me or not - its just not a way of working I've pursued before, but I can see benefits. So watch this space, and the Maps are due out on show in September.
Beach Huts, Maps and other pieces can be seen on my website which has a selection of my work.  Anything which interests, please contact me.

Posted by Beverley at 08:54 No comments:

Salvage to Selvedge - My Workshop

Past Saturday I took the meeting at my Embroiderers' Guild Branch.  Finances mean we do several of our own 'inhouse' events, usually a practical session.  I've done many of these over the years.  Between that and the other Members who take the meetings its getting harder and harder to think of something to offer up, not seen before or a new slant on things, for a room of mixed interests and abilities.

I have a reputation in my Branch - heard it said  a few times - "oh you know who Bev is, she does the weird stuff" - Moi!!!  Its more that I'm abstract... realism is beautiful but my brain and fingers just don't co-ordinate to make it.

So... can't let them down can I? Mwah ha ha.  I decided enough, can't expect and assume people have finances for things, nor for an afternoon out do they need to bring masses of stuff.  So in my world, whatever you have in the house can be transformed.  bbq sticks, wire, magazines, chunky beads from the 'buy this garment and get this lovely belt for free',calendars, and books, cardboard boxes.
My intent was not necessarily for them to go home with something beautiful, but rather just to go home and think of what was in the house which can be transformed with a bit of effort.  Its doesn't have to be from the stand point of finance, recycling, more just because its the right thing for the task.

So this is what I had to show them.... plus some of my own work. 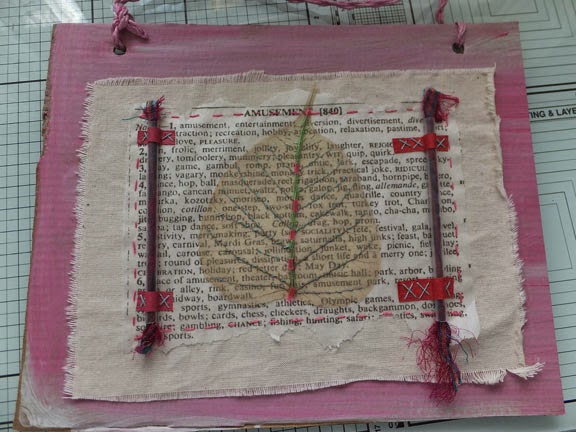 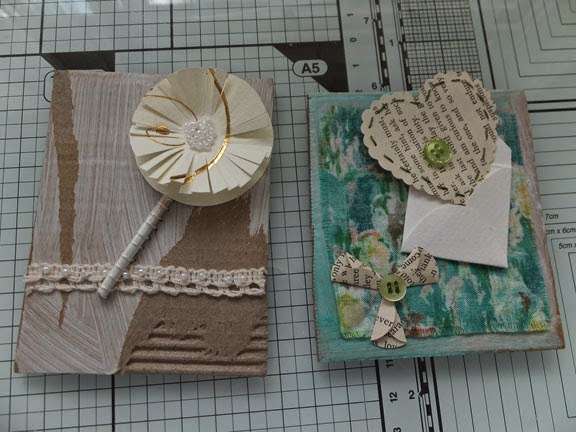 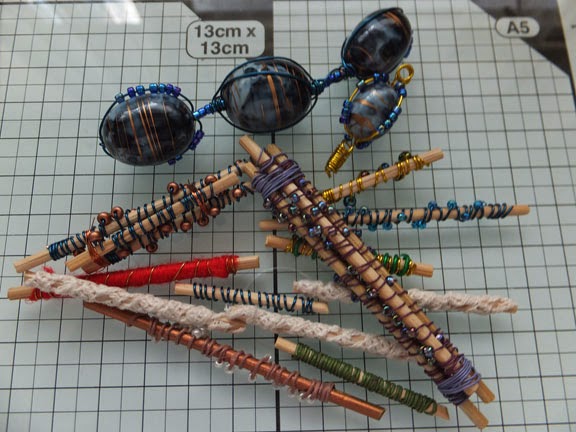 You can't assume anything - I asked if everyone knew how to make a cord with thread, pencil and a door handle. I've been doing since a young child, kinda thought one of these things everyone did... For some it brought back memories, for others they'd never come across.  So we had a go at that.  Yes I do have a cord winder machine, but that is no good if your students don't have, so I left it at home.
A selection of the afternoon's play.... 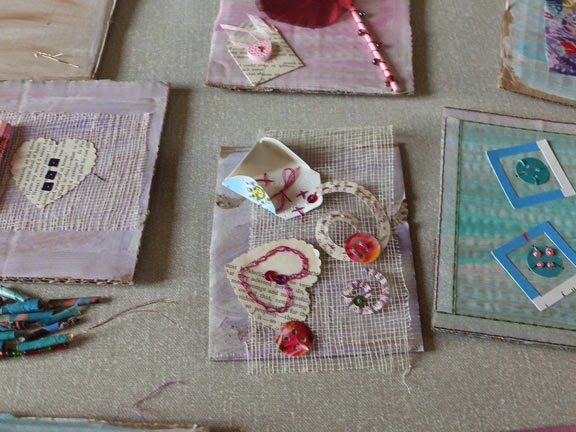 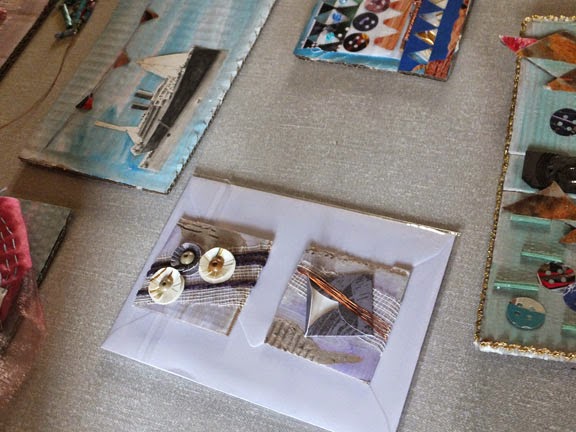 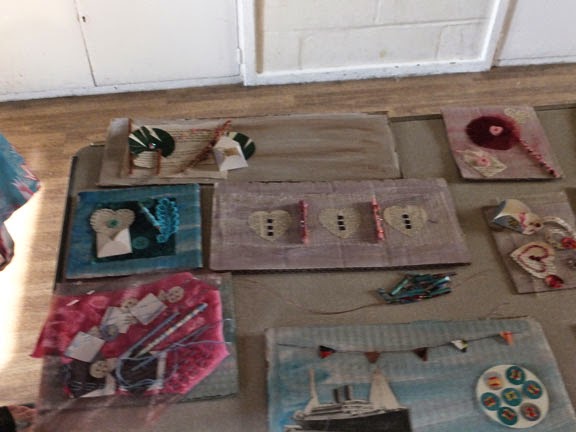 I must tell you, one of the ladies brought along her mother, who has early stages memory loss etc.  They have been having trouble getting her to engage with things in the assisted living place she's now in.  There is a crafts person with meetings, but she flatly refuses to join in.  Saturday though she leapt in at the pile of things, took an image from the book, cut it out, and made a piece.  Her daughter was thrilled.  May be the image struck a chord with her, may be it was not 'wasting' precious products, or just simply the different environment.  Anyway everyone had a go at something, chatted, ate cake - which was delicious - after all, that's really the main purpose of the afternoon.

I've already been thinking of what to do for them in the next Programme......a twist on a standard...
Oh and I was 'paid' - here's what I received. 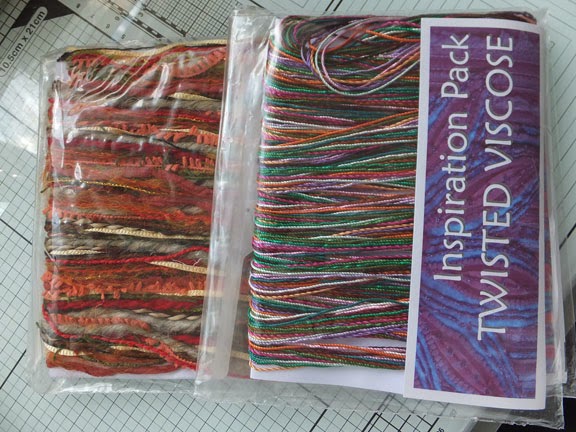 one more to go.

Art Trails that is.  Completed the Burnham Art Trail, work in the funeral directors who were extremely helpful and welcoming.  It seems an odd choice for a venue, but the reality is, they are part of the locality, the kind of business which we all will have need of one day, and if having art work in their windows helps to see them as less intimidating, why not.

The result of this Art Trail was a couple of small sales in the pop up shop, and after the event I was contacted with a request to purchase a piece which had been in the window. 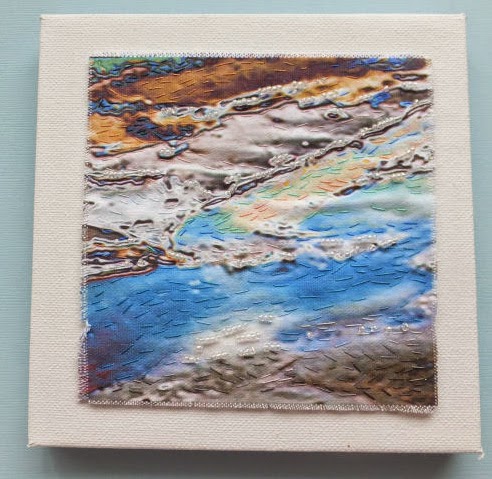 Aqueous III
has now gone to its new home.
Guess what... there were 3 of them, but the only one left now, all on its lonesome is Aqueous II 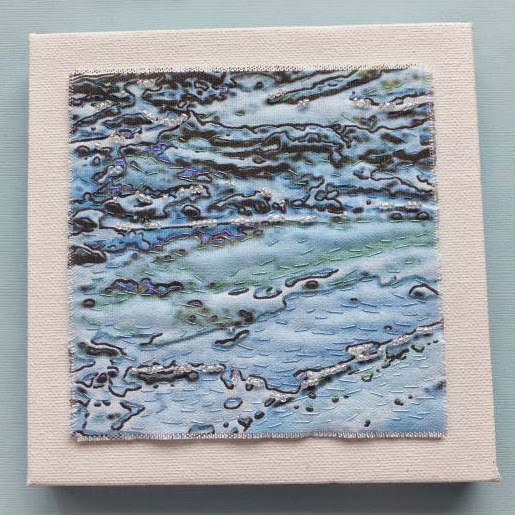 ﻿
each a photograph taken by me, digitally enhanced
printed on canvas with stitch and bead embellishment.
Most of my work is for sale, you can see many pieces on my website
please ask for more information.
I still need to make some work for Rochford Art Trail - I'm returning to another of my themes - maps.  Designs will be based on real places and imagined journeys.
Another piece of work has arrived home with me, after a big journey of its own.... 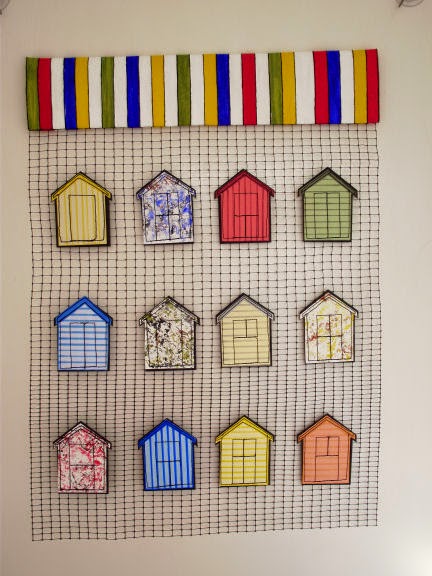 ﻿
﻿
Beach Huts
This was one of the first pieces I made when I joined The Material Girls.  Its been on tour in Canada and a few venues here in the UK, as part of the Articulated Materials, Bridging Waters collaboration.
It's very simple but I was just very pleased to have made the deadline for completion given I joined part way in to the project.  Its been well looked after on its journey and has come back in very good condition.  Thanks to our Canadian friends and to Chris, for organising this project.
Ideas are moving on... The Material Girls next project is well in hand, we are working hard lots of brilliant ideas already springing forth.
I even have ideas for pieces for the Art Trails in 2015 - I need staff though, so then I can get on and play design and make art.
Posted by Beverley at 14:43 No comments: