Last week I paid a visit to Chelmsford Embroiderers' Guild, not been for a while, but went specifically to hear the talk by Jill Flower.  See her website.  Lovely to catch up with people too, as I know many from that area, from initially studying City & Guilds Embroidery in Chelmsford.
Also watch this space, the Eastern Region of the Embroiderers' Guild is about to get its own website - so I've been busy supplying the information needed for that, as I'm our Branch IT Rep.  When it goes live I'll let you know.

The ERTF Owen Jones toruing exhibition has finished at Chelmsford now.  Thank you for visiting, I hope you enjoyed it, and it now moves on to Letchworth.  Do try to see it, because the accompanying sketchbooks are very informative, to see how everyone has the same subject matter but interprets it differently.

In the meantime I have a new business... well... decided I need to run a PPL (not to be muddled with VPL - visible pantie line, oooo errr) PPL - Postcard Production Line. Ha, did you think it was something else?  I am going to need some postcards for many projects and decided I needed some kidology - ie that it feels better to achieve lots of little tasks, than the long struggle with the big ones!  So below is a pic of one in production - I have 4 of these, not at all cost effective, as after stitching they will be painted, may be even gilded, a few surface embellishments - this technique usually involves 7 layers of paint or more, so really really a bargain for a purchaser.  Oh I can't show you the rest, himself has gone to France for 8 days and taken my best camera only just managed to rescue this pic before he waltzed off! 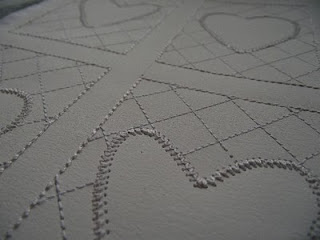 Oh, excitement ONE person has looked at my Sketchbook in the US - yipeee - I know, one, but hey its a start and I did have visions of it harbouring dust and never being touched.  So I count that as meeting the remit of the project - hopefully more will take a look, its very early on into that tour.﻿
﻿
Posted by Beverley at 08:14 No comments:

I popped along to see the ERTF/Owen Jones exhibition again at Chelmsford Museum.  Be quick, you have until 27th March to see if before it moves on to Hertfordshire.  See here  Lots of lovely comments in the book.  I had a chance to have a good look at the artists' sketchbooks which are exhibited alongside the pieces.  Its very informative.  Of course I'm part of the exhibition, you can see a snippet of my piece in an earlier posting. Following this I popped into Hobbycraft in Chelmsford.  It is a much larger store than the one in Basildon, and having sent him indoors on a recce to the one in Norwich, I believe it is also larger than that shop.  Of course I went in wanting nothing in particularly, but did ask the cashier to whisper the amount of money spent - cos it doesn't count if you don't say it out loud - does it?
I've also had confirmation of the date I'm at the Braintree Community Hospital - I've put the info up in the righthand menu - from end of September for six months.  This is a big thing for me.  Never ever have I put work anywhere for such a time period.
Having found that every single black pen in this house was not waterproof, and thanks to Miriam - I bought myself a set of Pitt artist pens.  I've had a little play. 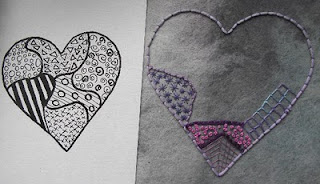 I don't know if Zentagles is the proper term for these or just a new invention - I'd call it simply doodling.  But the partial stitch version was started some months back, long before the pen came out.  I see in the current April/May issue of Quilting Arts magazine, that there is an item on using this technique in fabric.  But if you like this sort of thing then keep in mind the Burnham Art Trail - as the artist Peter James makes very detailed drawings.
Its the weekend, and I have Saturday alone - time to look at, stroke, may be even use, my new purchases!
Posted by Beverley at 16:16 No comments: 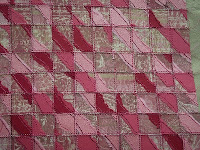 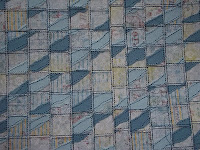 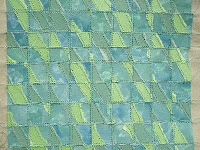 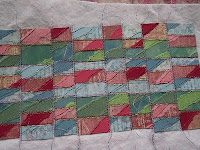 And this is what the strips became...  Notice no brown, technical fault rather than design.  Glue I used for the metal foil decided to firmly weld itself to the foot of the machine and up the needle, so impossible to work.
Next step needs contemplation, so these may sit for a while.
We went "home" on Saturday.  Back to Norfolk to see family, it was a case of go now (not been since 1st Jan) or else not another opportunity until late April, when there's a collision of successive Bank Holidays, which means those we need to see may not be at home!  Home visits involve a lot of driving across the county to see everyone, but for me, also involve a little ritual.  Whenever I go back to my home town, I visit the fabric shop!  Its been there years and years, I only remember it as such, though mother recalls otherwise.  Its a proper traditional fabric shop, not a craft shop, you won't find much by way of patchwork fabrics - just the type of fabric needed to make clothes, from heavyweight jackets to pretty summer dresses, and proper sewing thread to stitch them, no embroidery threads or anything fancy.  Its a rare shop these days, and yet whenever I visit, its always got other customers, so I think still much needed.  And what did I buy, its not glamorous... I bought some more felt - its the only place I know where I can buy it by the metre and not in silly little squares.  This time I bought in mottled grey, a new colour since my last visit! I use it a lot as a soft suport for my stitched paper, and so I have something to stitch into when adding hand embellishment.
Posted by Beverley at 09:37 2 comments: 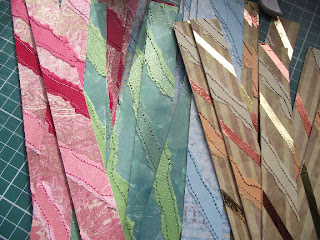 Busy doing nothing, working the whole day through.... sing along!!!


I've been trying to make some work, but its just not speaking to me, hence let's find a way to avoid it. I think the problem is the original plan, several small pieces from each colourway (above) when really I think I'll like it better as a larger piece in each colour, although the brown version might get binned.


Last week I was allowed inside the M25 to meet Miriam. Sadly the trail of breadcrumbs Miriam suggested I leave were all gone for the return journey, so with the masses of roadworks in this part of the world, I had a little excursion before getting home. But it was lovely to see her and we had a good chat.
On a positive note, if I didn't say, my Sketchbook arrived and was logged in for The Sketchbook Project, which is now on its tour of the USA!   My two submissions deadlines for mid/end Feb were duly made.  And this morning I've had an email to say I've been accepted on one.  It means work up for six months - I will get my time slot shortly, but its possible I'm looking at a time period covering early 2013!!!  The other submission I won't hear from for a while as yet.  And in the meantime another opportunity has arisen, this time for work to be up for 4 months.  So at the moment I'm in the mix of Happy Dancing, and stomach flip panic - I said I'd do WHAT!!!
Posted by Beverley at 11:27 1 comment: