This is the trick I now have to master... or is it Rub Head and Pat Tummy?

Actually I have two tummies to rub..... as we now have custody of these 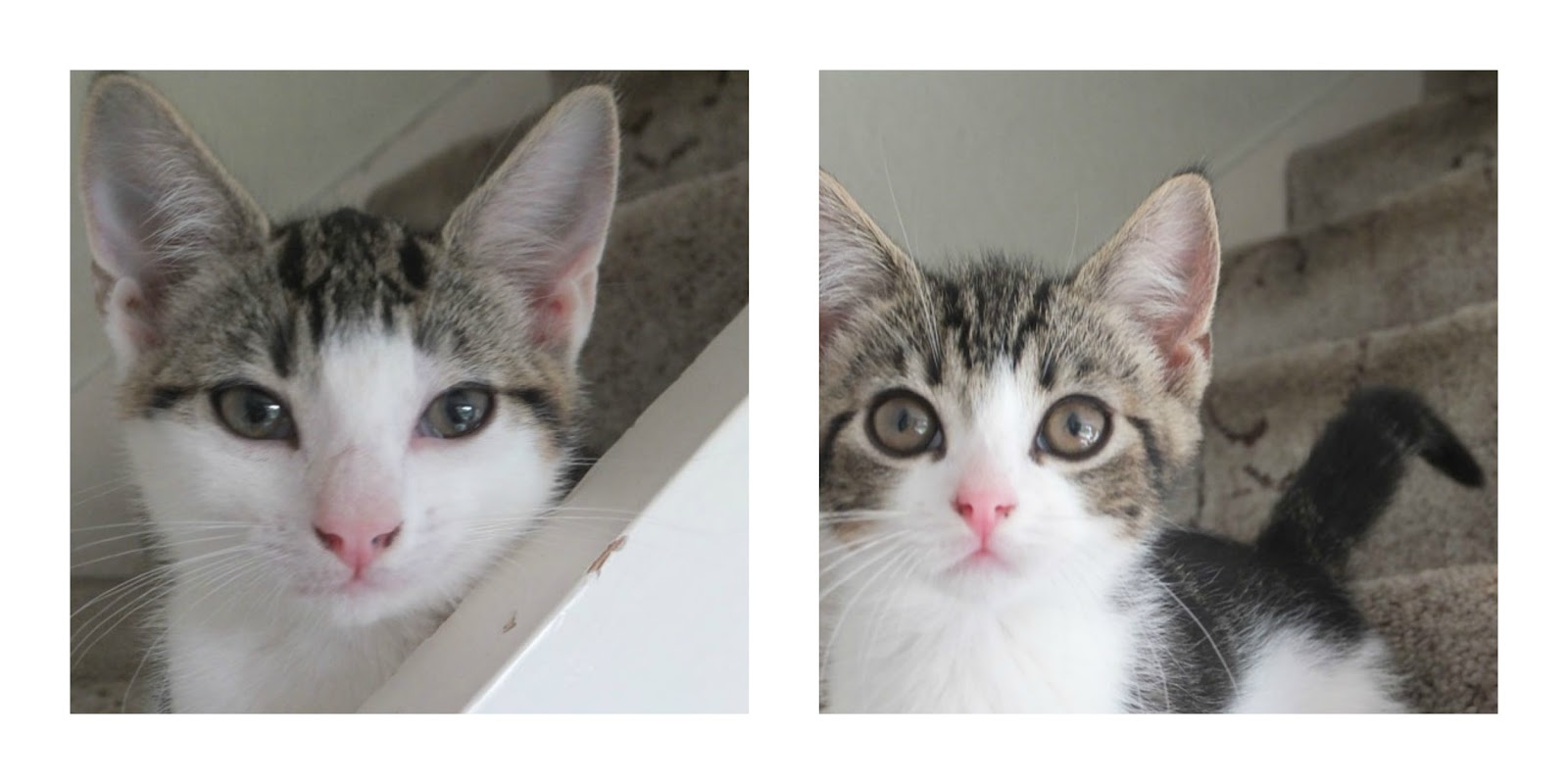 Had them one day, and survived the night with them.  Rescue kittens from Cats Protection.
I saw them on the website on the Wed and rang the next day, and they were photographed for the local newspaper on the Friday, to draw attention to all mass of abandoned kittens they are dealing with at the moment. We went to see them on the Saturday.  All of them from this rescue have found new homes.
My husband and I have had cats and dogs all our lives... sometimes both together, so for us being without a furry friend is a huge gap.  We lost our last rescue cat in February and he left a huge hole, particularly as he just collapsed and died without warning.
So much debate, should our next furry be a cat, should it be a dog, how about one of each?
We settled on a cat, eventually, and then it became, cat or kitten?
But its more which animals say to you, "you're right for me" because so many possibles, it would be tempting to have all of them.  So, decided on a kitten, because possibly its our last chance to have a kitten, being sensible, thinking how long animals live and if we waited til next time round, likely wouldn't be an option in 10 or even more years.
Then it became two kittens.  And it was Spike who we saw who called to us of the many on the various CP Branch pages we looked at.  Initially we went to look at one of the others from the litter to come with him, but it was Bandit who came to us, so that was decided.
They are very similar in markings, both tabby and white.  We chose their new names, and I like what I call "animal names" not people names for animals.  Bandit was obvious because with the lines straight out from the corners of his eyes,  he looks like he's wearing a mask, I expect he does a lot of swashbuckling at night.  Can imagine him like Puss, from the Shrek movies.  The other name has come out of personality.  Spike, is that, he's spikey and sharp and inquisitive, he's done all the exploring first.
And I'm on the computer cos having spent an hour or so knocking the living daylights out of each other, they are now asleep.
I promise I won't turn my blog into a catfest.  They may occasionally appear on my personal Facebook page. which I do try to keep separate from my Facebook textile page.

Come and Go and Back Again

Well the end to last week was a mixed bag...
The next scheduled class I had with The Sewing Box was cancelled.  Its hard to find students.
But hey ho, its all about timing, right time for the tutor, the students.  Even whether a technique is a current trend.   So I won't be surprised if in a few months, someone says... "I want to learn...."

But I have my date for the next Workshop at the regular Embroiderers' Guild meetings.  Saturday 12th July 2014.  Finances are tight, for all, so we have our own in house Member led meetings, to supplement the Guests.  Branches have a wealth of talent (not meaning me) so its possible to find ideas and its not so scary for anyone to host the meeting.  They don't heckle (much), holding a big stick in your hand they behave.  I've the Programme to type up, and put on the websites shortly, I'll have it proof read first.  The aim is always to have it available for the new Guild year from 1st September, there are some very talented guests, coming along.  So keep checking the sites.

However, forthcoming events, if you just happen to be in Canada....

The latest part of the tour of Articulated Materials, Bridging Waters Exhibition open on 1st September.

Back here on my door step, well, its me!  19th-28th September.  Here's the map for the Rochford Art Trail.  The link will take you to downloadable maps.  You will find my work in the window of the Old Hall, on South Street, Venue 6. 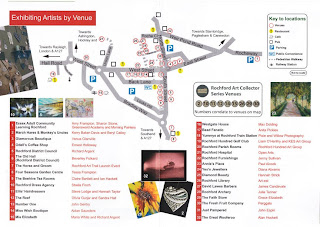 I am also demonstrating at the Adult Community Learning Centre, Venue 1, on Saturday 21st September.

I made myself a tick list this week, checking it twice... it me who's naughty, (ie not doing) but honest I'm nice!!!  I gave myself 7 tasks to do one day... bit ambitious I did 5.  One of them was prep the labels for the Trail... mhmmm now I'm wondering did I spell them right?  But my next task.... play create brilliant jaw dropping pieces, with my Gelli Plate.

Posted by Beverley at 11:53 No comments:

Last Saturday at the Embroiderers' Guild, it was me, teaching, bookbinding.  They all made a pamphlet stitch book and a one page fold (maze) book.  So everyone achieved and went home with something.  I came home with this, as my thank you gift.  I've said I'll do another afternoon workshop next year, but don't know the date yet - but I will eventually, cos its me who is typing up the Programme! 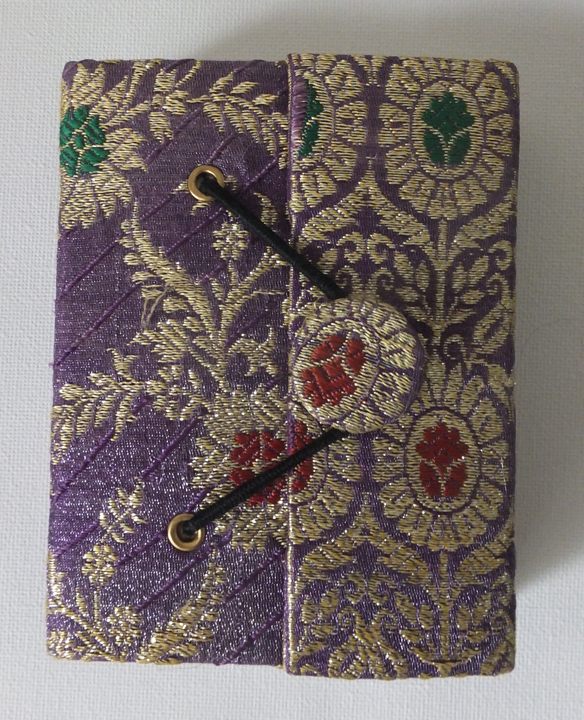 A book with handmade paper inside from EG﻿

Well so far this week, its been arty and full of excitement and planning.

Site visit to my Art Trail venue on Monday - to measure up and prep for it.  Nice widow, small sill... its about 2m long but workable depth is only about 15cms.  Certainly a challenge.  Not had this set up before.  Its part of the enjoyment of an Art Trail for me, because you don't know until its allocated where or what or how you can use your venue.  Its the oldest building in town, so it also means restrictions, no pins etc into the window frame.  The Trail leaflets should be available now, I've to collect my allocation. Now I have an idea of space, I can get on and make what is planned with this..... 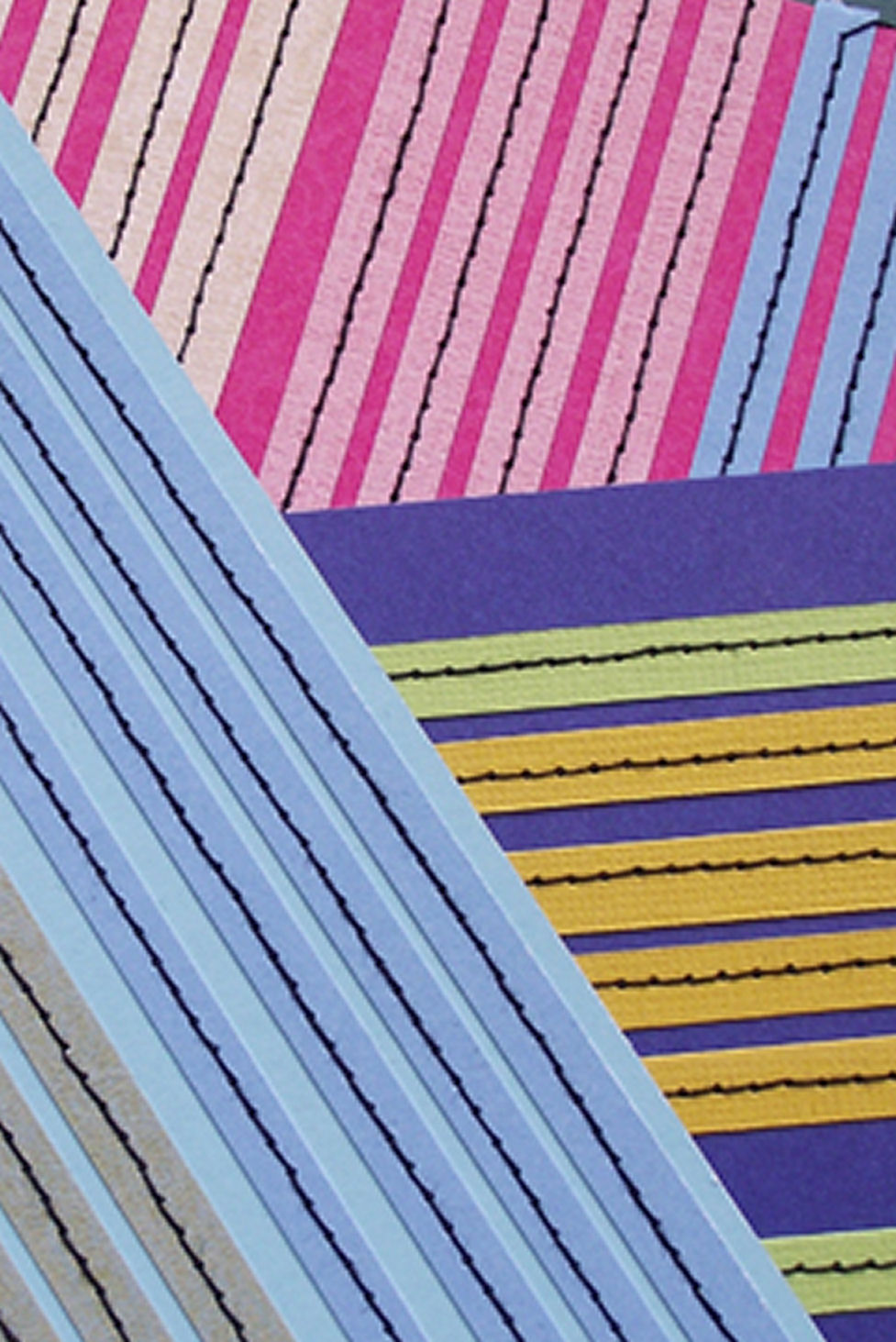 Next, the Material Girls meeting - lots of excitement there.  All I can say is that having bought my diary for 2014, and thinking this is so early to have this - I now need to be thinking about 2015.  But personally I need to finish off some other things, before I can allocate brain space to that one. I was inflicted on the Girls on Tuesday, as it was my turn to explain my project for our current theme. 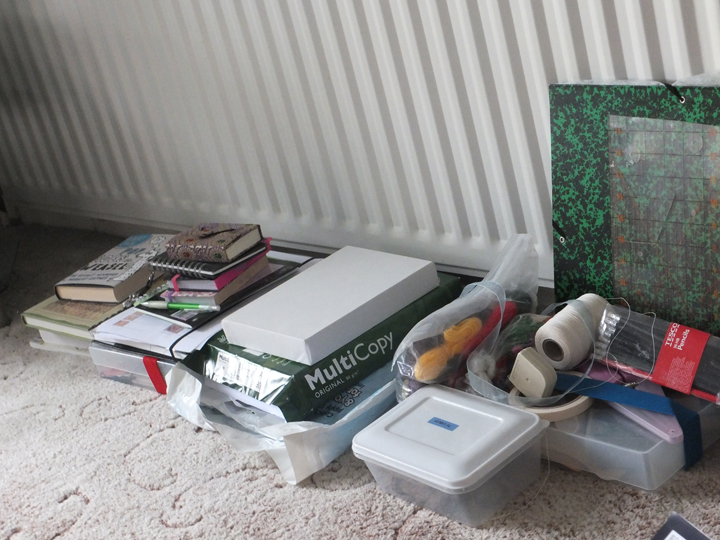 This is the result of those two things - all of it got to go back into cupboards upstairs.  So far I've divided it into relevant piles.  Told him indoors, plan is to grab something and take it upstairs and put it in its home.  Mhmmm need semaphore I think, cos he totally walked past the pack of copy paper.... and the box of pencils.  Next time printer runs out of paper, nope no idea where its kept, where did you last see it... sigh.

Posted by Beverley at 08:42 No comments:

I do hate not being able to show you things properly, but, take a look at what's going on for me arty wise. 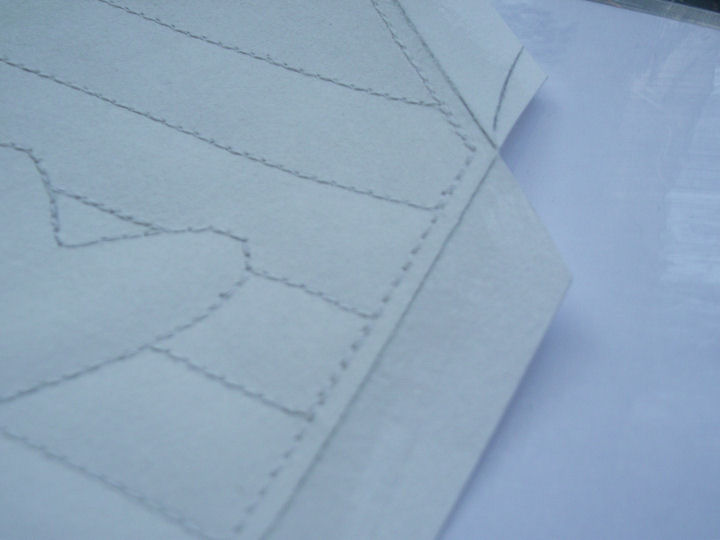 Something which is a work in progress/test 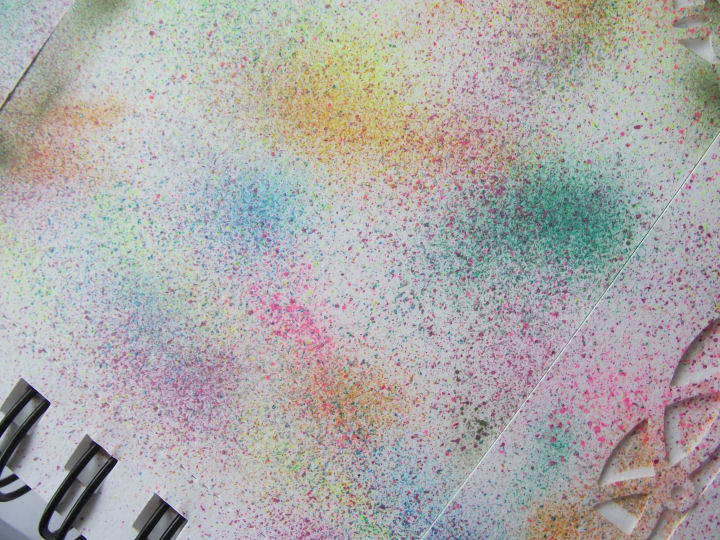 A gismo which means I can do this.... 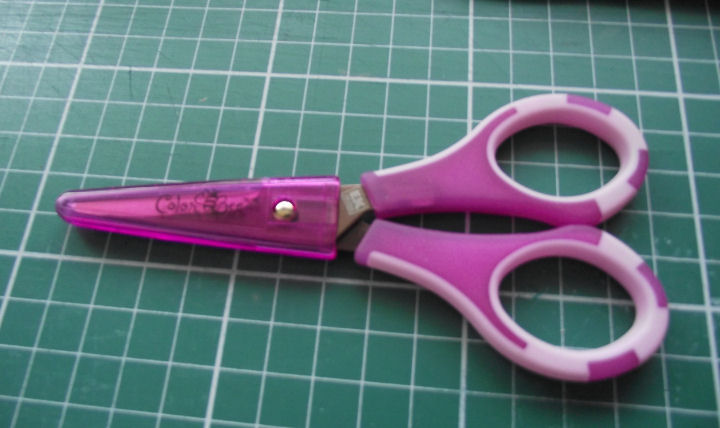 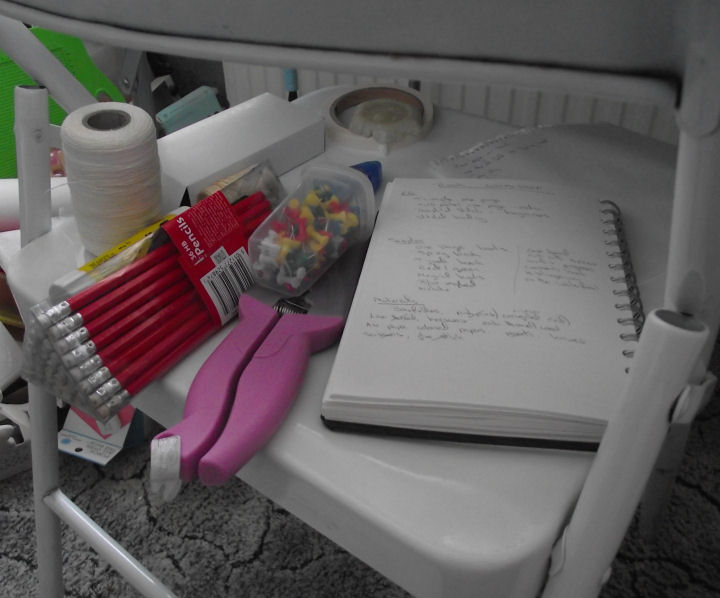 No space on table, so using chair to gather together things for Sat's workshop
I don't go mad over threads, I have enough hand threads to last many lifetimes!  Rarely buy fabric, and trying to cut down on my paper buying, but I do like equipment (and a nice bit of storage!).  Why show the new scissors?  Incidentally they are EK Success ColorBee.  In my house my scissors are under guard.  You will need to fill a form in triplicate, pay a hefty damages deposit and be subject to intense interrogation little chat about your need to "borrow".  (I did catch himself using cheapy scissors as a screwdriver, and promptly broke the handles - so I'm justified)
I lurve my sewing scissors, and have several from the Professional range of Janome/Kai.  However, I realised I've not actualy bought myself quality scissors for paper.  How could I miss that trick.  Years and years of being a paper person and not bothered.  I saw these being demonstrated and thought, why not.  Part of the demo was that they will make a teeny weeny cut right at the tip, as in only about 1mm.  So I had to test, I mean, can't believe what you see.  And yes, they do.  Not really sure about the colour... but it has an advantage, can actually find them on the table.
Right finish gathering for Sat - so I can sit down and make..... whatever it is I'm making and can't tell you!!!
Posted by Beverley at 08:44 1 comment:

CHANGE TO PREVIOUSLY ADVISED ROOM
Saturday 10th August
Embroiderers' Guild meeting
usual meeting room: THE LOUNGE
We are using our usual room for the August meeting, as the Lift is out of action. Balmoral Centre, Salisbury Avenue, Westcliff-on-Sea, Essex.  If you are a visitor to us, the car park is at the front of the building, and The Lounge is on the ground floor at the back.   See an older posting here.
﻿
Posted by Beverley at 17:21 No comments: